And important to mention is that I can not stop the deamon after start.

@HenryCo: I've sent you an e-mail with a test build to try. If you don't get one please check spam folder.
Top

Could not resolve hostname xxxxxx.xx: ErrNo -2, Name or service not known

I think I have that issue fixed. At least it now works in Android 7.1 VM, where it didn't previously. If someone wants to give it a try on own device please send me a note to nzbget@gmail.com. I don't want to commit the fix into develop until I have a confirmation for it.
Top

Hi, I just found your app and it looks awesome. But I am having a problem installing within the app after installing the .apk. I am running Oreo 8.1 on a Google Pixel 2. I have tried both the latest testing and latest stable version. I have attached a screenshot of the error.

Any fixes would be appreciated, thanks! 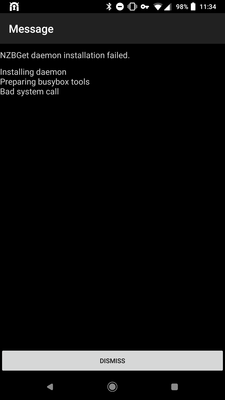 I'm afraid this will not be fixed any time soon. I don't have devices running 8.1 and Google doesn't provide ARM emulator for 8.1.
Top

I'm afraid this will not be fixed any time soon. I don't have devices running 8.1 and Google doesn't provide ARM emulator for 8.1.

I confirm the same issue with Android 8.1 on Nexus 5X but I also get the same error in x86 Android emulator on desktop (not sure if it was Android 8.0 or 8.1). I was able to run the scripts via "adb shell run-as" but never directly from the app (different policies for different contexts?).

Google mentions some breaking changes since Android 8.0: https://android-developers.googleblog.c ... oid-o.html and https://android.googlesource.com/platfo ... I-level-26 but I don't know much about native development.

I tried recompiling the Android project, getting rid of some obsolete stuff and bumping all possible versions but it didn't help (can send PR).

I'm not sure if the app also doesn't require ongoing notification which would prevent the system from terminating its running processes (on newer versions of Android). Another bump is the inability to save/unpack files to external SD card (though it may require only one additional line to allow writing to it's dedicated folder on SD, but not anywhere else).

All in all I ended cross compiling NZBGet for use in Termux (https://github.com/moneytoo/termux-scripts) and it works really well.
Top

Seeing a similar issue. I can replicate using a standard api27 emulator in android studio. A bit of googling suggests the native code for busybox is being blocked by new seccomp filters and it needs to be built by something like the ndk and not libc/etc, apparently..?

I chad trouble getting busybox to compile myself so I couldn't get further.
Top

Android 8 support is being worked on. I've created an issue on GitHub tracker - Installer for Android, based on NDK #538.
Top
Post Reply
132 posts

Users browsing this forum: No registered users and 3 guests